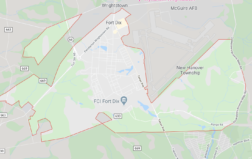 Criminal charges for possession of marijuana and other drugs are relatively standard at Fort Dix. While it is rare for someone to be arrested for distribution or possession with intent to distribute a controlled dangerous substance (“CDS”) like cocaine, Xanax, or heroin, the base does have its share of personal possession cases. If you were charged with possession of any type of drug at the installation, hiring an accomplished criminal lawyer that routinely appears at the Federal District Court on the base is crucial.

We are the Law Offices of Jonathan F. Marshall and have the attributes to secure a favorable outcome in your Fort Dix drug case. Our team can offer you:

To obtain a free consultation immediately, contact our Mount Holly Office at 609-491-2110.

Charged With Drug Possession at Joint Base McGuire-Dix-Lakehurst

Fort Dix spans approximately 10 miles with areas located in New Hanover, Pemberton, and Springfield. There are also many miles of roadway that traverse the base, which can result in vehicle traffic stops and searches. Encounters with the Fort Dix Military Police also arise as the result of checkpoint inspections at access gates to the base.  Irrespective of the scenario that caused you to receive a criminal complaint or summonses, hiring an accomplished Fort Dix drug possession defense lawyer is imperative. The lawyers on our staff can effectively serve you in this capacity, handling any type of CDS offense, including:

Statistics show that about 75% of drug possession cases arising at military bases or other federal properties, for example, criminal charges at Sandy Hook Park, are resolved without jail. What this means is that your Fort Dix CDS case has a high probability of being resolved for probation, along with a fine. You should know, however, that 21 U.S.C. § 844 allows the judge to impose a sentence for simple possession that includes: up to one year prison and a $1,000 fine for a first offense; at least 15 days but no more than two years in prison and a $2,500 fine for second offense; and at least 90 days but no more than three years for a third offense. The penalties escalate dramatically if you are convicted for manufacturing or distributing CDS in violation of 21 U.S. Code § 841 at Fort Dix.

A drug case is significantly more complex when it occurs at the federal level and this precisely what transpires when someone is arrested at Fort Dix. Hiring the best New Jersey federal drug crimes lawyer is exactly what is necessary for anyone confronted with a charge of this nature at Joint Base McGuire-Dix-Lakehurst. It would also help if your attorney was highly familiar with the court system and personnel at the United States District Court located at Fort Dix. The members of the defense team at the Law Offices of Jonathan F. Marshall possess this experience and talent to help you avoid a negative outcome. To speak to one of our attorneys in a free consultation immediately, call 609-491-2110. Lawyers are available 24/7 to assist you.