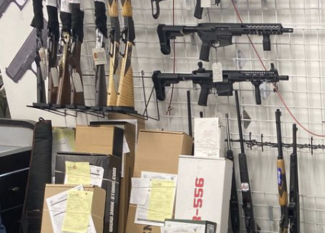 Lawmakers in New Jersey have done their best to limit gun rights and limit possession of firearms. A major result of these efforts is an unlawful possession law that corrals far more than is necessary when it comes to handguns, shotguns, rifles, and other firearms.  This fact is even more concerning when you consider that most charges for unlawful possession of a weapon in NJ carry mandatory terms of imprisonment.  What should be readily apparent to you is that you need to mount a potent defense at the Burlington County Superior Court to maintain your freedom if you are facing this criminal offense. Your best tool to protect your liberty and future is to hire a criminal attorney that is accomplished in defending firearm and weapon offenses.

Here at the Law Offices of Jonathan F. Marshall, our team is thoroughly equipped to provide the persuasive defense you will need. Our unique credentials to ensure your success include:

If you would like to take advantage of a free initial consultation with a lawyer who has the know-how to help you, call 609-491-2110. Attorneys are available 24/7, so you contact us anytime to discuss an upcoming Burlington County detention hearing or any other matter that requires our assistance.

Unlawful Possession of a Weapon Offense in Burlington County

The law governing unlawful possession of weapons is N.J.S.A. 2C:39-5. The statute is divided into subparts that are each directed at specific types of weapons, principally firearms, and the grade of crime applicable to each. We have organized this discussion in the same manner in the subheadings below.

Unlawful Possession of a Machine

Machine guns are strictly prohibited under subsection (a) of 2C:39-5. It is a second-degree crime to “knowingly has in his possession a machine gun or any instrument or device adaptable for use as a machine gun without being licensed to do so as provided in N.J.S. 2C:58-5”. In order to secure such a license, the applicant must not only satisfy the requirements for obtaining a handgun permit but also demonstrate to the court that public safety and welfare require that the machine permit be issued. It is rather difficult to imagine how it would be necessary for public safety and welfare for such a permit to be issued other than for a government-sanctioned security force. Absent such an exceptional circumstance and a valid machine gun permit, possession is unlawful in New Jersey. An individual convicted of this second-degree crime faces 5-10 years in prison and a fine of up to $150,000.

Unlawful Possession of a Handgun

Unlawful Possession of a Shotgun or Rifle

It is unlawful to knowingly possess a rifle or shotgun in Burlington County or elsewhere in New Jersey if you do not hold a firearms purchaser identification card. It is a third- degree crime punishable by 3-5 years in prison and a $15,000 fine to unlawfully possess a shotgun or rifle in violation of N.J.S.2C:58-3c.

Unlawful Possession of an Assault Firearm

Possession of an assault rifle or similar weapon without a license is another crime of the second degree set forth under  2C:39-5. The prison term is 5-10 years in prison if you are convicted of unlawful possession under this section.

Unlawful of Other Weapons

It is also unlawful to possess any other form of weapon under circumstances not manifestly appropriate for such lawful uses. The term “weapon” means any object capable of lethal use or of inflicting serious bodily injury. Circumstances are not manifestly appropriate when the possessor has either an intent to use the object to threaten or cause harm to another person, or to cause damage to property of another. This type of unlawful possession charge results in a fourth-degree crime, up to 18 months in prison and a $10,000 fine.

New Jersey adopted the Graves Act to deter the commission of criminal activity using a firearm. A mandatory minimum period of imprisonment with no eligibility for parole eligibility must be imposed under this law whenever someone uses a handgun, shotgun or another firearm while committing a robbery, aggravated assault, drug distribution or any other crime. The Graves Act was subsequently expanded to include unlawful possession of a handgun. The result is a requirement that every sentence for unlawful possession carry “stip time” that must be served before the defendant is eligible for parole. The only way around this requirement to secure probation, Pretrial Intervention or flat time sentence is to secure a Graves Act Waiver.

The greatest area of defense in Burlington County gun charge cases like an unlawful possession offense stems from illegal searches and seizures. There are definitely instances where police conduct a warrantless search without probable cause and also situations where a warrant has been secured improperly. Miranda is also an area which we often attack. Securing a waiver or employing some other method to favorably resolve a case is another option. Our attorneys are well equipped to proceed to trial if all efforts to resolve a case prove unsuccessful.

An unlawful possession of a weapon charge, especially one involving a firearm (e.g. handgun), can be devastating if it isn’t handled properly by the attorney you hire. You need to hire someone to represent you that has the know-how and skill to defend you effectively. The attorneys at the Law Offices of Jonathan F. Marshall have the qualifications that are needed to help you. Contact us anytime at 609-491-2110 to discuss a detention hearing or other component of your criminal case. A lawyer is available 24/7 to speak to you and initial consultations are free.